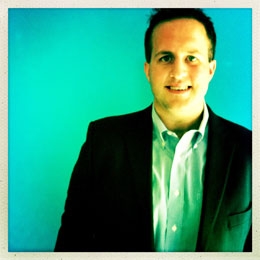 Black didn’t know Connolly at the time, but when he researched schools to pursue an MBA, he stumbled across Connolly on the UNC Kenan-Flagler website and realized he was the one sending packages.

“All my guys were walking around with UNC Kenan-Flagler mugs,” Black says.

After graduating with a degree in political science from Johns Hopkins University and five years serving in the U.S. Army, Black wanted to go back to school. He took the GMAT in Afghanistan and sent Connolly an email telling him he was interested in applying to the MBA Program at UNC Kenan-Flagler.

Within seconds, Connolly had emailed Black back, telling him the School would love to have him. Because Black was in Afghanistan with limited Internet at his combat outpost while applying, Connolly even printed off his application and turned it in for him.

“Nick is a leaning-forward kind of guy,” Connolly says. “He isn’t waiting for things to happen; instead, he is looking ahead and getting after things. He seems to be a natural-born entrepreneur.”

Black remains connected to the UNC Kenan-Flagler and Chapel Hill community through his work with Stop Soldier Suicide and Victory Social Capital.

After experiencing the magnitude of soldier suicide firsthand, Black and his friends in the military started Stop Soldier Suicide, a nonprofit organization, in 2010.

“I had a soldier come back from 15 months on the border of Pakistan where we fought every single day and he took his life before the exit at Fort Bragg,” Black says. “It’s a massive issue so we’re trying to get out in front of it.”

Black says they’ve been able to take Stop Soldier Suicide to a national level with the help of UNC Kenan-Flagler and the wider University.

The Frank Hawkins Kenan Institute of Private Enterprise helped with marketing (that included a TV news story) and strategy for Stop Soldier Suicide in addition to providing space at UNC Kenan-Flagler for its annual meeting, Black says. And, Stop Soldier Suicide was featured in a strategy class by Chris Bingham, a strategy and entrepreneurship professor.

Black also started Victory Social Capital (VSC), alternative investment firm, with two of his MBA classmates. His MBA opened up the doors to a lot of different areas for the firm, from finance to sustainability, and gave him a larger picture of how things get done.

The firm’s goal is to bring economic solutions to social issues. VSC aligns the capital markets, evidence based non-profit models and government through a performance-based contract to drive positive outcomes in the human services area. Prisoner recidivism rates, which are the rates at which prisoners get out of prison and then return, are a huge issue, Black says.

“Over 88 percent of the people that go into the system have substance abuse issues and that’s why they come back. We spend a lot of money on having people in prison, let’s fix the reason why they’re there” Black says. “If we can find organizations that cost a fraction less (than prison) and they have better results, then let’s take these organizations, scale them up and be able to address this huge need.”

Black’s time in the military, during which he served a total of 27 months in Afghanistan, influenced his business skills and education.

Black and his wife live in Durham, and welcomed their first child, Anna Grace, on Oct. 15. Outside of work, he coached high school football last year – and will run a half Iron Man on his 30th birthday.

“So I’m officially washed up,” he says, laughing.