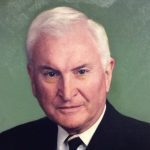 The Stump family’s love and support of UNC Kenan-Flagler Business School has been a proud tradition for more than 60 years. Three generations of the family have attended the School – J. Ralph Stump (MBA ’55), Timothy A. “Tim” Stump (BSBA ’79) and current student Timothy A. “Bo” Stump Jr. (MBA ’17).

When Ralph passed away last fall, the family made a generous gift to UNC Kenan-Flagler in the spirit of paying his appreciation forward.

“Ralph was proud to be from North Carolina and was honored to be in one of the first MBA programs in the state. He honed a lot of his financial skills at UNC, which led to a wonderful career in banking and mergers and acquisitions,” says his son Tim. “He loved the Tar Heels, so it was fitting that we honor him by supporting the place that launched him into business.”

Born in a small cabin in rural Ashe County, Ralph’s career took off after receiving his MBA degree, taking him and his wife to Iowa, Utah and California with the Pillsbury Company and then back to North Carolina with CIT Financial Corporation. “He revolutionized factoring and asset-based lending for the furniture industry,” says Tim. “As his career grew, Ralph was promoted to the executive suite in the New York headquarters and attended the Harvard AMP professional program. Ralph loved to suggest that the harder he worked, the luckier he became.” 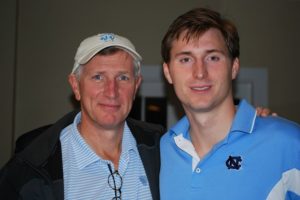 Tim runs the company today. “As I like to say, I joined Dad in 1990 after a fun and rewarding eight years in New York and Atlanta, but I basically drove the car and carried the briefcases at the beginning. It took some time to learn the furniture industry and his contact base, but rather quickly I added value as a point person and eventually became an equal partner with him.”

Bo, the son of Tim and his wife, Kim, earned his undergraduate degree in history at UNC.  With two parents who have MBA degrees, Bo realized he didn’t have the hard financial skills taught in business school. He wanted to attend a Top 20 program, preferably on the East Coast. As an avid Tar Heel it’s no surprise he decided on UNC Kenan-Flagler, where he is a recipient of The Schrum-Boulware MBA Fellowship Fund.

“I would love to have another great student attend UNC Kenan-Flagler who would not come otherwise,” says Tim. “Carolina is the total package – from a great education to a wonderful community to great athletics and culture – and such a positive launching pad for a career. I think Ralph would be very happy that his school remains a world-class institution.”