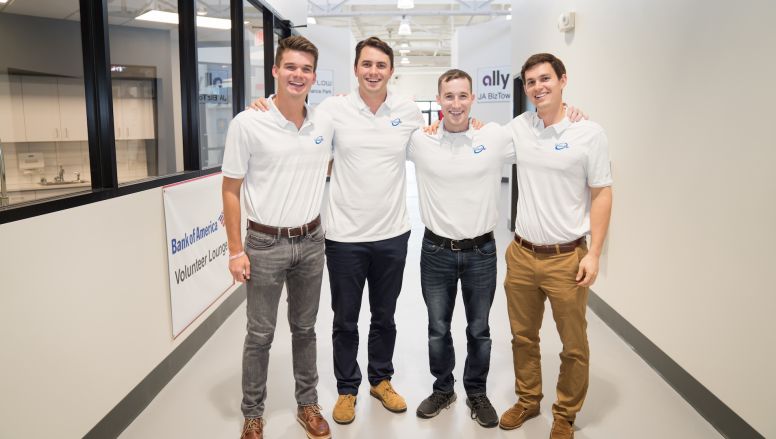 While many investors are searching for the next tech unicorn, other savvy funders are eyeing family-owned enterprises, the trades and so-called dirty jobs.

One of those investors is Mike Griffin (BSBA ’87), a partner at Griffin Brothers Companies (GBC) in Charlotte. For  three decades his passion was growing his family’s consortium of dirty businesses.

“We sold our founding business in 2016, and I thought that might be a time to start a private equity division and recruit people with an exceptional work ethic and limited means,” he says. “Now my passion is mentoring and coaching. I like to stay engaged with college kids, helping them find jobs and giving them advice. It’s about providing social capital.”

Griffin created ZoomUp to fund and grow business in the dirty-jobs category, and mentors young business people – his Zoomers – who want to own the companies. 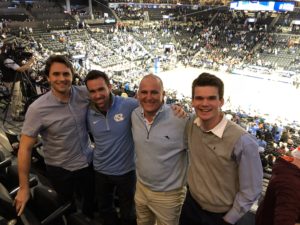 He hires Entrepreneurship Apprentices to work side-by-side with him for one to three years while they fine tune their entrepreneurial skills. “My hope is that an apprentice transitions into a Zoomer, and operates and eventually owns a ZoomUp acquisition,” says Griffin.

Griffin was serving as a Carolina Challenge judge when he met his third apprenctice, Austin Helms (BSBA ’16),  a finalist who was aiming for Silicon Valley. I didn’t like his business plan, but I loved his passion,” recalls Griffin. “We developed a mentoring relationship and I talked him into the dirty business space. I offered him an apprenticeship in January of his senior year.”

Helms led the recruitment and search sides of ZoomUp during his apprenticeship, and Griffin showed him the ropes of business ownership, acquisitions and financial management. When the gig was up, Helms became the term he helped create: a Zoomer.

“I’m trying to find young people who want to grow well beyond their personal needs – the zoom in ZoomUp – and need capital, mentoring and a path,” says Griffin. “Generational wealth is what I’m preaching.”

The original thought was to buy legacy-challenged family businesses. Griffin and Helms met with 40 owners to share their vision of purchasing their businesses when they were ready to retire and then place young entrepreneurs to lead them.

“So many blue-collar businesses are owned by baby boomers, 10,000 of whom turn 65 every day, and many of these businesses close upon their retirement or death. We’re in danger of losing those businesses if they don’t find the next generation of leaders,” Griffin notes. “Chapel Hill does a great job teaching leadership. If I can talk young men and women into considering a leadership position in these fields, I know they’ll be successful.”

But matching the owners’ timing with Zoomers’ readiness was difficult, so he pivoted from acquiring blue-collar businesses to helping young entrepreneurs start businesses in those industries.

Today ZoomUp has six companies and seven Zoomers. Four firms are helmed by UNC grads, while a Charlotte-Mecklenburg high school graduate, a Virginia Darden MBA alum and an East Carolina University graduate lead the others.

The ideal Zoomer is 25 to 35 years old, grew up in a solid family with little to no means. “Their extreme drive is often triggered by a chip on their shoulder from early life events, such as witnessing success and wealth in others, a family crisis or health issues, says Griffin.

In addition to Helms, his Entrepreneur Apprentices included:

A Zoomer leads the business we acquire and could own up to 90% of the business, and UNC is fertile ground for ZoomUp partners.

Helms became the seventh Zoomer with the creation of Ease Plumbing with licensed partner Derek Thornburg. “With Derek’s experience and Austin’s passion, we started it,” Griffin notes. “Now Austin is learning the business from the bottom up. He’s turning wrenches during the day and figuring the business side at night. We achieved $45,000 revenue in the first month, hired a third plumber and bought his fourth truck.”

Houston Summers (BA ’16) and Sebastian Williams (BA ’10) worked as consultants for Deloitte and IBM,  respectively, before becoming Zoomers. They created Ravel, which performs water and fire restoration and preventative maintenance services for residential and commercial properties.

Griffin’s dedication to the Business School and University is deep, but it didn’t start out that way.

“I wasn’t happy about the liberal arts curriculum – I just wanted business,” Griffin laughs. “I didn’t feel I had time for psychology or things like that. I resentfully signed up  for an interpersonal communications class and it was one of the most impactful classes I took. It made me think about human behavior and understanding yourself better so you can understand others. Today I attribute Chapel Hill’s liberal arts focus with giving me a more diverse education. I resented it, but it might be the most important stuff I learned.”

Fraternal organizations provided other transformative moments. Griffin joined Alpha Kappa Psi Business Fraternity his junior year and became one of its leaders. Then he and a group of friends started social fraternity,  Delta Sigma Phi, where he got a taste of being an entrepreneur, running their house and its business dealings.

“Until my senior year, I thought I’d go work for a big accounting firm, but I fell in love with starting that fraternity,” Griffin says. “When one of my dad’s vendors took me to lunch, we talked about that and he helped me realize that I could do that same entrepreneurial thing within my father’s business. Having that experience at Chapel Hill, plus the education I got at the Business School, I knew I could grow and diversify the business my dad spent almost 30 years building.”

Griffin isn’t just a financial supporter and employer of Carolina graduates – he’s also deeply involved in the life of UNC Kenan-Flagler. He shares his time, expertise and insights with the Entrepreneurship Center and as an Adams Apprenticeship Advisor. He also serves on the board of advisors  for the Family Enterprise Center. He and Helms, who took family business courses as a student in the Undergraduate Business Program, have attended the annual Family Business Forum together.

Carolina was a blessing, says Griffin. “About 10 years ago, I started reflecting. I connected the dots that a lot of my success could be attributed to my experiences at Carolina, academically and socially. I felt like I had this debt to pay back. So I give back.”