3 things to know about the gender pay gap 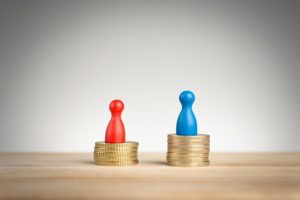 Each year we recognize Equal Pay Day, which represents how many extra weeks American women must work in order to earn the same annual pay as men. Currently, women who work full-time all year make 79 cents on the dollar compared to men. That’s 18 cents better than it was in 1960, when the government first started collecting this data – but we’ve been in the 70-cent range since 1990.

Why is the gender pay gap so stubbornly persistent? The problems—and the potential answers—lie in the range and complexity of issues underlying the pay gap. Addressing each of the three factors that follow in a comprehensive effort among government, the educational system and the private sector will move the needle toward closing the remaining 21 cents.

The pay gap is much smaller for younger, unmarried women who do not have children than it is for working mothers. When Gen X and Millennial women first enter the workforce, their wages are generally much more competitive with men’s. According to 2014 statistics, women who have never been married make 94 cents on the dollar compared to never-married men. But as women go through the milestones of marriage and children, the gender pay gap widens. Case in point: Working mothers make 75 cents to the dollar compared to working fathers.

Why? First, childbirth often involuntarily takes women out of the workforce for an extended period because their spouses do not regularly have access to similar parental leave benefits. On average, women have 1.4 years less work experience than men—and leaving the workforce for any amount of time has a direct impact on wages. This is why it’s important for parental leave policies established by the government and employers to be gender-neutral.

Second, childcare often competes with the time that women can dedicate to their jobs on a weekly basis. As a whole, women are more likely to work part-time jobs, while men are more likely to work full-time jobs and put in overtime. Yet hourly wage records collected by the Bureau of Labor Statistics show that even if women worked the same number of hours as men, they would still make 15 percent less—indicating that more factors contribute to the gender pay gap.

Gender norms have produced a bifurcated labor market, to the disadvantage of women. The biggest driver of the gender pay gap today is the fact that women and men tend to go into different careers—a phenomenon known as “occupational sorting.” An analysis of Bureau of Labor Statistics data finds that occupations with a majority female workforce pay 17 percent less than occupations with a majority male workforce.

This is largely due to two factors. First, women continue to face barriers to entering the most lucrative occupations—a holdover from decades of entrenched gender norms that determined which jobs were open to women. Second, jobs in caregiving and support roles that tend to attract women – like teaching, nursing, and administration – are under-compensated considering the value they provide to society.

This is where the educational system comes into play. The best-paying job of all is chief executive, but there are currently only 20 female CEOs in the S&P 500. In order to get more women to the top, we need to attract more women to graduate business programs. To build the pipeline, we must lay the groundwork as early as primary and middle school to encourage girls’ interest in math-based fields.

Companies that actively work to address internal gaps will attract more talent. Many of the top corporations in the U.S. are taking it upon themselves to create a culture that enables women to succeed. Formal recruitment, mentoring and sponsorship programs help identify and nurture high performers. Personal leave policies often go above and beyond what is required by the letter of the law. Several well-known companies in the tech industry are even conducting internal audits of employee salaries to confirm that women and men in the same jobs are on equal footing.

Why are companies investing so much in these initiatives? In the fierce competition for talent, programs that support women and working parents are a selling point to nab the leaders of today and tomorrow. Family-friendly policies can improve employee retention and satisfaction for high-skill and low-skill jobs alike.

It’s simply good business to ensure that women can contribute to the fullest in their workplaces—and that will help close the gender pay gap for good.

Emily Liner (MBA ’15) is an economics policy advisor at Third Way, a think tank based in Washington, D.C. Her report, “A Dollar Short: What’s Holding Women Back from Equal Pay?” was featured in the The New York Times.