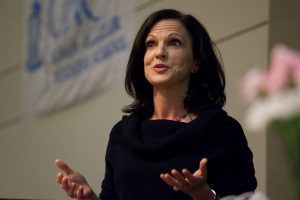 Nearly 300 people gathered at the 2016 Carolina Women in Business Conference, where speakers discussed navigating career challenges, job searches and the role of gender in the workplace.

Janet Mountain, executive director of the Michael & Susan Dell Foundation, kicked off the morning by touching on the conference’s theme – imagine, invest, inspire – and sharing her career advice.

To stay inspired in your role, “Always be all in,” she says.

As she prepared to graduate from business school, Mountain agonized over whether to accept a job offer from Dell. During her grueling first six months on the job, she thought the move – her first job out of business school – might have been a mistake. But she told herself to give it a year and things began to turn around, leading to opportunities to move up in the company and eventually run the Michael & Susan Dell Foundation.

“It’s not what you can say ‘yes’ to – it’s what you can’t say ‘no’ to,” says Mountain. “Life is not a series of choices, as many people describe it. It’s a series of trade-offs.”

She applies that philosophy to being a working mom and choosing whether to miss a work event or a family event.

Work-life balance was also raised by panelists during a session titled, “Fork in the road: Dealing with disruptions in your career.”

“Everyone will have specific advice,” AIMCO Vice President Kelly Nagel (MBA ’08) told attendees. “Take those as data points, but determine what you need and how you can get there.”

A workshop led by Elizabeth Dickinson, professor of management and corporate communication at UNC Kenan-Flagler, focused on another important topic: stereotypes in the workplace. Women professionals must navigate the challenges of being direct at the risk of being perceived as aggressive or outspoken.

“This isn’t something that men do to women,” says Dickinson, who urged attendees to “re-evaluate the negative stereotypes that you have of your fellow female workers.”

She encourages women professionals to read “The Confidence Gap” – an article published in The Atlantic – as well as The Confidence Code by Katty Kay and What Works for Women at Work by Joan C. Williams. 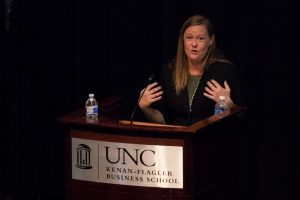 Conference attendees noted that women’s success in the corporate world depends on changing attitudes towards men’s roles in home life. When men and women share the responsibilities involved with raising children, both parents’ careers benefit.

Sometimes, the best career opportunities begin as happy accidents – as was the case for Becky Gansert, director of worldwide operations for Amazon Prime Now.

Gansert let curiosity and learning lead the way in her career, which ultimately brought her to Amazon. There, she found a role where she could be herself – no heels, no makeup – and focus on working out the puzzles behind Amazon’s complex logistics on the operating floor.

As a leader, she’s focused on creating an enjoyable place to work. Amazon’s fun environment helps her team be more productive and attracts good employees. But when it comes to hiring, Gansert values people who have solved complex problems in the past more than relevant experience.

Her advice for the career journey: “Experiment often and don’t be afraid to fail big – because you learn by failing big.”