Mary Shelton Rose (BSBA ’87, MAC ’88) can’t be defined just as someone who made it in the business world. 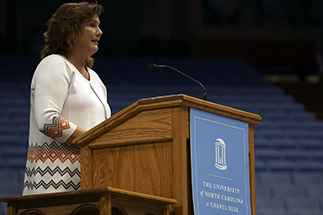 Yes, Rose is a senior partner at PwC, which chose her to helm its U.S. effort to understand Brexit and prepare clients for what’s to come.  She has worked around the globe, including Melbourne, Sydney, Kuala Lumpur, Beijing, London and Paris.

And she continues to consult for the entertainment industry – and attends the Emmy Awards.

But Rose wants you to recognize she is more than her resume, no matter how impressive. And she wants other UNC Kenan-Flagler graduates to recognize that people are so much more than their professional achievements.

Speaking at the Master of Accounting (MAC) Program commencement, she urged the Class of 2017 to avoid falling into the trap of greed, follow their own moral compasses, and reflect on who they are.

“Are you a noun or a verb? Is your title more important than the doing? It may be great to be president, but just being present has a value all its own,” she said in her speech, which she described as a “highlight of her career” because of how special the UNC Kenan-Flagler and the MAC Program are to her.

Here’s how she defined herself: “I am a daughter, sister, wife, mother, cancer survivor, a CPA, a mentor, a supporter of the arts, a die hard sports fan, a senior partner in the world’s largest accounting firm and, most importantly today, a proud graduate of this program and forever a Tar Heel.”

Her outlook –in part – is a result of career opportunities that opened her mind to limitless possibilities.

She spent two years in Melbourne, Australia, early in her career. “Living abroad changes the lens through which you look at business, but – much more importantly – about life,” Rose says. “It gives you an appreciation for what you have at home and for other cultures.”

The Australians truly recognize the need for the balance between work and life.   “The beauty in life is the journey and not just the destination,” she says.

Rose’s adventures truly began when she entered Carolina as an eager undergraduate. Having grown up in North Carolina with her two older brothers who attended the “state’s school,” Rose knew she was meant to be true blue.

Now she sees the weight her UNC degrees carry the world over. “I didn’t come out of school with just a business degree,” she says. “I came out with a well-rounded education and perspective.”

When Rose first arrived on campus as a freshman, she planned on being a math major, but changed her mind after taking an accounting course. “It just clicked with me,” she says.

She was impressed by the time professors invested in their students. When the late Professor Dave Hoffman suggested she stay at UNC Kenan-Flagler to study in the MAC Program, she was up for it.

Next, Rose launched her career at PwC. In addition to working abroad, she investigated white collar crimes and worked with her clients in their interactions with various government agencies. 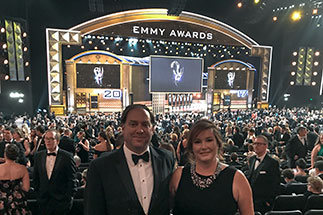 Her work took her out West to work with major movie and television studios to conduct audits of their businesses and provide financial-based consulting. This is a favorite part of the job, says Rose, because she engages with immersive content, such as films or books, to better understand consumers. It has made her a part of the media and entertainment industry, which – let’s face it  – is just plain cool.

Now she is spending much of her time as the U.S. Brexit leader for PwC. Rose is working with a global team to help clients understand what they need to do in response to the extraordinary unfolding events. While Rose admits she didn’t know much about how the European Union or the British government operated before she assumed the role, she quickly became someone whose insights are sought by clients and the business media, too.

No one knows exactly what the future holds as Brexit takes shape, says Rose. The only certainty is that there will be uncertainty, which requires companies to have a granular understanding of their operations and regulatory environments to know when take action, says Rose, and anyone who plans on doing business in the U.K. and Europe must pay attention. “They need to understand cost structures, operations and supply chain so they can be agile and prepare for a number of possible outcomes without having great information.”

As a senior partner at PwC, Rose strives to be a motivational leader. Building relationships, being brave and taking risks are all needed for success, she says.

Team building is a priority for Rose. “There is nothing better than putting together a high-performing team and watching people grow,” she says.

Investing in the development of other people – clients and colleagues alike – is a major component of her job. And it is something that appeals to her in her role as a mother to two teenagers. “They’re finding their own identities and it’s fun to watch,” says Rose.

Sports help you learn resiliency, teamwork and perseverance, says Rose. While the world beckons women into math- and science-related careers, she stresses they also need courage to go outside their comfort zones. Leaders, after all, get restless and aim to discover what’s next, she adds.

“I like to look for challenges and take them on,” says Rose. “This quest – along with your relationships – makes for a rewarding life.”