Putting the Carolina Way into practice 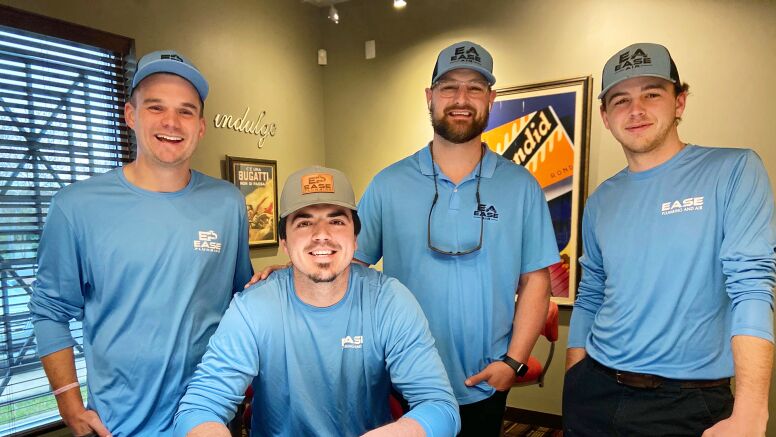 In February 2021, catastrophic winter storm Uri left devastation in its wake – especially for unprepared states like Texas, where homes are weatherized for extreme heat rather than extreme cold. As thousands were left without power, heat or water, the desperate need for service workers reached critical levels. 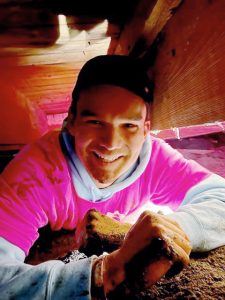 Several states away in North Carolina, a plumber had an idea. Austin Helms (BSBA ’16), founding partner of Charlotte-based Ease Plumbing and Air, was approached by one of his technicians. “One of my guys, Aaron Williams, came to me and said things were getting really bad in Texas. He had this crazy idea to load up the truck and go down there to help.”

Making preliminary calls to several Dallas plumbers, Helms couldn’t get anyone on the phone. “Everything went to voicemail and in the service industry, the only reason you don’t pick up the phone is if you are completely overwhelmed.”

As the idea cemented in his mind, Helms called longtime mentor, business investor and fellow UNC Kenan-Flagler alum Mike Griffin (BSBA ’87) to get his take. Griffin responded without hesitation: “You should go, and you should do it philanthropically. Other people will gouge prices – don’t do that.”

The connection between Helms and Griffin dates back to Helms’ student days when he was studying entrepreneurship. Griffin, a Charlotte native and managing partner in Griffin Brothers Companies, is a member of the UNC Kenan-Flagler Board of Advisors and stays actively engaged with the Entrepreneurship Center, Family Enterprise Center and Leonard W. Wood Center for Real Estate Studies.

Attending a Carolina Challenge event one year, Griffin heard Helms pitch a startup idea for a waterless car-washing business. He approached Helms and said, “I don’t like your business plan. But I like your passion.”

Griffin employs a people-first strategy similar to that of business greats like Trammell Crow, whom Griffin learned about while he was a UNC Kenan-Flagler student engaged with the Wood Real Estate Center. The philosophy focuses on finding young people with talent and leadership potential, encouraging them to start their own businesses, and backing them with the resources, networking and experience necessary to success.

This philosophy is so central to Griffin’s career that he launched ZoomUp Investments, LLC, an investment fund specifically designed to assist ambitious and driven entrepreneurs. Another ZoomUp investment, Sasser Restoration – a company that includes Tar Heel partners Houston Summers (BA ’16) and Sebastian Williams (BA ’10) – also was deploying teams to Texas along with seven tractor-trailers of equipment and supplies. Griffin counts Ease Plumbing and Sasser Restoration amongst ZoomUp’s most successful investments.

UNC Kenan-Flagler Advancement team members follow Helms on social media and contacted nearly 50 alumni and friends in the Dallas area to spread the word that Ease Plumbing was headed their way.

Packing a truck to the brim with every material they could anticipate needing, Helms and his team started the long drive to Texas. “We had no idea what we were driving into,” he says. “Driving 24 hours, getting stuck somewhere in Arkansas with thousands of dollars’ worth of materials in the truck, figuring it out as you go along – that’s entrepreneurship to a T!”

Somewhere along that trip, the UNC Kenan-Flagler Advancement team told Griffin and Helms to call Kathy Crow of Dallas. Through the Business School grapevine, Crow had learned Ease Plumbing was on its way to offer assistance. When she asked how she could help, Helms gave his standard, light-hearted response: “Send us any robot plumbers you have.”

The team’s biggest need, ultimately, was a place to stay. With hotels at full capacity as people escaped their powerless, waterless houses, Crow’s response was immediate and gracious: “We’ve got room. Please come stay with us.”

“Everyone was in chaos down here,” says Crow. “Nobody had groceries, and friends were looking for firewood. Ease Plumbing came at a time when we really needed them, and they were so industrious – they were willing to take any job.”

Kathy and her husband Harlan Crow – who happens to be the son of the aforementioned Trammell Crow – housed and fed the team for the entire week. In the midst of 12-16 hour work days and never knowing what the next day would bring, Helms recalls warm conversations around the Crows’ dinner table and passing around plates of fried chicken.

The family’s generosity amazed Helms and his team. “Next thing you know, Kathy is posting our name on Nextdoor,” says Helms,” and the calls came flooding in.”

Ease Plumbing did more work in one week in Dallas than in their first three months of business. They answered calls and drove the truck door-to-door. “Our average dispatch time in Charlotte is 20-25 minutes, but in Dallas it was eight minutes.” Helms joked, “It was a plumber’s dream!”

The team eventually had three trucks in Texas and ended up getting fully licensed. “People started serving us food as we worked, some people couldn’t pay and others donated to cover costs, people cried. We went in one house that hadn’t had water for eight days; they’d been bathing out of a sink at their office building.”

The demand they experienced in Dallas is not too far from reality, says Helms. “Your average tradesperson is in their fifties or sixties, is ready to retire and doesn’t have someone to take over. We’re starting to see a huge gap in trade services where supply far exceeds demand.”

The Crows are urging Helms to open an Ease Plumbing in Dallas. “We have been encouraging him because everyone they touched while they were here has come to me and said how great they were,” says Crow. “Not just as plumbers, but as people and as a business. They made a real impact.”

The Crows’ daughter, Sarah, is coming to UNC Kenan-Flagler as an Assured Admission student for fall 2021, and the family is thrilled to be joining the Carolina community. “There are great ambassadors for UNC Kenan-Flagler out there, roaming the country and doing good!” says Crow about Helms and his team.

“We’ll be back in Texas someday,” says Helms, who has an ambitious vision for Ease Plumbing and aims to impact the future of the service industry at large. He plans on investing in other business leaders – specifically in trade services – the same way Griffin invested in him, by providing financial backing, vouching for their reputation, and helping with back-end aspects of business management.

From Trammell Crow to Mike Griffin to Austin Helms, this multi-generational legacy of investing in young talent and giving them the tools to succeed gets at the heart of the UNC Kenan-Flagler mission.

Ease Plumbing was one of many companies from the southeast that traveled to Dallas to help repair the city after the storm. Like Helms, many Tar Heels are using their Carolina connections to build businesses that invest in people. He and others like Griffin are among the thousands of UNC Kenan-Flagler alumni tapping into their entrepreneurial spirit to help improve the human condition around the world.

Helms does have one unique claim to fame, however: “As far as I know, I’m one of only two plumbers to ever come out of UNC Kenan-Flagler!”