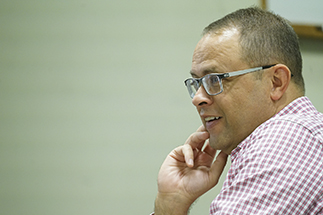 Larry Chavis is the essence of what it means to be a teacher – a passion for guiding young minds and serving the community.

Teaching was a calling, says Chavis, a strategy and entrepreneurship professor at UNC Kenan-Flagler Business School.

A Lumbee Tribe member, he grew up in Lumberton, North Carolina, thinking of his teachers as role models. When he went to college, his professors became his mentors – and the people he chose to emulate.

“I wanted to have the same impact,” Chavis says. “I wanted to move people along, inspire them.”

Chavis gets the most satisfaction taking Undergraduate Business Program students from their proverbial nests on campus and watching them fly – almost literally – on study trips abroad.

Chavis has taken students to China, Taiwan, Vietnam, Indonesia and Chile on Global Immersion Electives (GIE) to learn how businesses operate in emerging markets.  He guides students as they experience diverse cultures, practices and perspectives.  “The world is a small place,” says Chavis. “No matter where you work, you will interact with someone significantly different from yourself.”

And it’s not just the students who get something out of these journeys, admits Chavis. He has grown exponentially, he says. He credits UNC Kenan-Flagler with giving him the opportunity to travel and broaden his own horizons.

“Everything I have become as a professor is a result of what happens on these trips abroad,” he says.

Chavis is moved by the memories how the students are transformed by their global studies. He recalls a student had his first experience riding in a taxi and on a plane on a GIE. The student wrote an essay about how the trip changed his perspective on the world – later returned to UNC Kenan-Flagler as a corporate recruiter.

“It brings a tear to my eye,” says Chavis. “I Facebook friended his dad to let him know how proud I was of his son.”

The path for Chavis to UNC Kenan-Flagler was not a straight one. He always had great admiration for the University, but he did not end up on campus for college. In fact, whenever his colleagues bring up their college years, they have to address the elephant – make that Blue Devil – in the room: Chavis earned his BA in anthropology from Duke University.

“I tell students, ‘I want to make you the most loyal Tar Heel you can be, but we might disagree on game day,’” says Chavis.

Chavis went on to earn an MS in applied economics and management and an MA in Asian studies from Cornell University, and a PhD from the Stanford Graduate School of Business.

In 2006, Chavis began working for UNC Kenan-Flagler, a place he says he knew “was in touch and connected to helping the people of my home state.”

Chavis also teaches the core microeconomics course in many of the MBA programs. “It is a really hard course,” says Chavis. “I like the challenge of making it meaningful to students.” 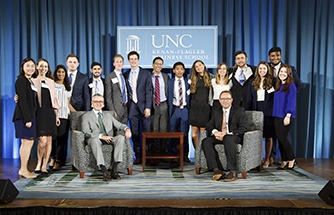 He also is teaches the course for student leaders who organize the Undergraduate Business Symposium, one of the oldest and largest student-run career development events in the U.S. Students apply for 15 spots in the class and those selected plan and organize the event with his guidance. More than 400 students and 120 company representatives from 45 companies attend the annual event.

Chavis served on the Global Education Initiative committee, which developed a unique framework to ensure every UNC Kenan-Flagler graduates with specific global competencies. This made him, he says, consider how students need to grow to work in the global environment.

Students have recognized Chavis for his commitment to them and their education. He has received teaching from his students in the Undergraduate Business, Weekend MBA and Global OneMBA Programs.

And Chavis is touched every time students recognize his work.

“These awards say students think I’ve had an impact on their life in a small way,” he says. “That’s thrilling for me.”

Chavis’ research is global, too. Indonesia is one of his focus areas. He has evaluated a World Bank project and its impact on the country’s villages and infrastructure.

Indonesia is also the ancestral home of his wife and he’s learned its language so well he translates for his wife when the family visits.

He has also studied the access small businesses have to credit in Eastern Europe as well as the influence of company boycotts in the U.S.

One of the most pressing issues he is working on is the business of healthcare and economics of the aging for the Kenan Institute of Private Enterprise, a nonpartisan, business-policy think tank at UNC Kenan-Flagler. He hopes his work with UNC’s schools of public health, medicine and others on campus to further examine these issues can have a broad impact.

Of course, he also finds time to spend with his wife, their three kids and a dog. One of their favorite pastimes is travel. Trips to Indonesia and Singapore with the kids mean visits with many relatives and seeing where their grandparents were born and eating ice cream at a shop generations of their family frequented.

A devotion to family history is not much of a surprise to anyone who knows Chavis. What many might not expect is his love of hip-hop music and rap. A former student caught him dancing to rap music on a Jumbotron at a football game.

Chavis is gratified with how things have turned out for him. He never imagined he would end up at UNC, his state’s school. He says he’s privileged to be here.

“I am just a guy who grew up in rural North Carolina,” Chavis says. “Now I’m living the dream.”