Creating value in real estate: The sum is greater than its parts 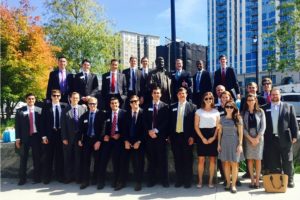 The UNC Kenan-Flagler MBA Real Estate Club on a career trek to Atlanta.

When any multifamily developer can build vinyl floored, white walled, quartz counter-topped apartments, how can any one generate excess profits? With somewhat standard unit interiors and negligible variations in amenities, real estate development firms are routinely resorting to new and more creative strategies to unlock additional value from their dirt.

During our MBA Real Estate Club trek to Atlanta, we witnessed the challenge of differentiating a product in a saturated market firsthand. With 2,800 units in lease-up and an additional 15,000 dwellings under development, Atlanta firms are being forced to get increasingly creative to distinguish their assets from the rest. This comes from building in parallel with other developers to gain incremental value in the aggregate.

Leonard Wood, Jr. (MBA ’98), a senior managing director of development at Trammell Crow, understood this potential with the Alexan on Krog project – a 200+ unit multifamily in historic Inman Park. By coordinating construction with Paces Properties’ Krog Street Market, a 12,000 square foot 1920s warehouse turned foodie mecca, TCR achieved an overall lease rate significantly above the firm’s original underwriting. The Alexan’s industrial-chic common spaces, resort-inspired saltwater pool and well planned units were fabulous in and of themselves. But it is the combination of proximity to unique cultural activities, inimitable architecture and future access to the Atlanta BeltLine Greenway that makes the neighborhood – and in turn, the Alexan – a standout asset in the city’s booming multifamily market.

On the other end of the spectrum, Pollack Shores is spearheading the residential portion of The Battery Atlanta in suburban Cobb County. The new $400 million entertainment district, centered around SunTrust Park – the Atlanta Braves’ new 41,000 seat stadium – will feature a plethora of food options, the revival of an iconic music venue and over 400,000 square feet of retail. The combination of diverse assets has created a live, work, play environment that will attract a broad range of interested renters and push rents well above forecasted levels, notes Brian Oates, vice president of development at Pollack Shores.

With consumer tastes and preferences changing to favor urban, amenity-rich and experience-driven environments, firms are shifting their focus from building suburban, garden-style apartments to co-developing urban, all-in-one communities. The Southeast in particular presents immense potential, with major cities only recently transitioning from car dependency to dense metropolitan walkability. Coupled with growth rates approximately 40 percent higher than the rest of the country, this shift will create a major opportunity for firms that can implement an effective co-development strategy. Soon, the American dream may evolve from a home with a white picket fence to one with a local organic coffee shop and roaster around the corner.