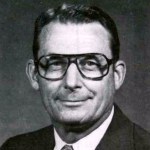 The legacy of beloved accounting professor Harold Langenderfer will live on at UNC Kenan-Flagler Business School thanks to the generosity of his former student, Coleman Ross (BSBA ’65).

Ross established the Dr. Harold Q. Langenderfer Distinguished Professorship of Accounting in honor of the late professor with a goal of raising $1 million in endowed funds.

Langenderfer was a student favorite during his 40 years of service to UNC. An Ohio native, he served in the U.S. Army from 1943 to 1945 in the U.S. and Okinawa. He received an undergraduate degree from Miami University, a master’s degree from Northwestern University and a doctorate from Indiana University. In 1953, he accepted a position at UNC Kenan-Flagler where he rose to full professor as the KPMG Chaired Professor of Accounting, retiring in 1993. He died at age 80 in 2006.

When Ross was a student at Carolina, he was initially reluctant to study accounting as his father and brother Guy (BSBA ’55) were both accountants and he wanted to establish his own separate identity. However, he had a natural aptitude for accounting and quickly discovered that accounting courses – the dread of many of his classmates – were well suited for him. Ross decided to accept his destiny and with two greats of Carolina’s accounting faculty as his instructors – Harold Langenderfer and Ike Reynolds – flourished with a new sense of purpose and the knowledge to succeed in his career.

“I didn’t fully realize how much I had benefitted from my accounting education at Carolina until after I had started my career with Price Waterhouse [now PricewaterhouseCoopers],” says Ross. “Later, I had the opportunity to know Dr. Langenderfer personally. Not only was he a teacher and mentor to thousands of UNC students, he also contributed to the accounting profession in North Carolina and nationally. He was recognized by the AICPA with its Distinguished Achievement in Accounting Education Award in recognition of his excellence in teaching and his national prominence in the accounting profession, and by the American Accounting Association with its Accounting Exemplar Award for his notable contributions to professionalism and ethics in accounting education.” 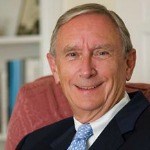 Similar to Langenderfer, Ross’s career has spanned more than 50 years. He provided accounting services for financial services clients at PricewaterhouseCoopers for 34 years and was the national leader of PwC’s insurance practice. Following his retirement, he served as chief financial officer for two New York Stock Exchange-listed insurers. Over the past 13 years, he has been an independent director of six insurance and insurance-related companies.

In addition to Ross’s initial gift of $333,000 to establish the Langenderfer professorship – which will provide support and recognition to a top faculty member in the School’s accounting program – he pledged $167,000 in additional funds as a matching gift to challenge other UNC Kenan-Flagler alumni and friends to join him in honoring Dr. Langenderfer by also giving to the fund.

To date, $115,975 of the $167,000 goal in third-party donations has been raised and matched by Ross. Once the goal is met, the fund will be eligible to receive a one-for-two match from the State of North Carolina, bringing the total value of the fund to $1 million.

“Coleman’s generous gift has made this professorship possible, and with the generosity of other alumni, we hope that the gift will provide funds for another faculty member to touch students’ lives for many years to come,” says Joan Langenderfer, Harold’s wife. “The fact that Harold is being honored in this way is incredibly meaningful to me and my entire family.” 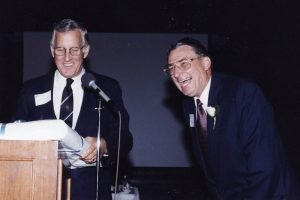 “Harold was a great Tar Heel, and I was fortunate to know him as both my teacher and my colleague,” says Dean Doug Shackelford (BSBA ’80). “As a longtime accounting faculty member here, I greatly appreciate Coleman’s generosity – and that of our alumni and friends – which will enable the legacy of one of our most influential professors to strengthen accounting education at UNC Kenan-Flagler.”

Over the years, Ross and his wife, Carol (BA ’64), have supported the University and UNC Kenan-Flagler in a variety of ways, including the creation of The Coleman D. Ross Master of Accounting Fellowship Fund and The Carol Morde Ross Endowed Distinguished Professorship in Psychiatric-Mental Health Nursing Fund. In 2013, Ross received UNC Kenan-Flagler’s Master of Accounting Alumni Merit Award.

If you would like to join with Ross and support the Dr. Harold Q. Langenderfer Distinguished Professorship of Accounting, please visit UNC Kenan-Flagler’s Make a Gift page and search for fund designation 173335.