Adams Apprenticeship is a game changer for all-in entrepreneurs 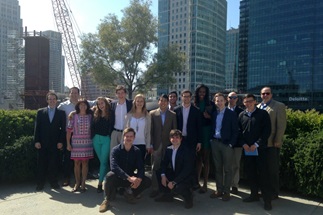 Student entrepreneurs coming out of UNC haven’t traditionally lacked in passion, enthusiasm, intelligence and work ethic, but any undergraduate or graduate student aspiring to be a company founder will likely lack in the entrepreneurial experience necessary to execute.

An innovative program at UNC Kenan-Flagler is looking to fill this experience gap by matching Carolina’s top entrepreneurial talent with experienced advisors, but not in the typical mentor-mentee way.

The Adams Apprenticeship, named for UNC benefactor, entrepreneur and pharmaceutical pioneer John Adams – takes the top 20-30 student entrepreneurs at UNC every year and matches them with a personal board of advisors—three to five mentors with whom they will develop relationships and seek guidance from for years to come.

“What I find with students coming out of university is that they will typically make the transition to becoming an entrepreneur five to 10 years after they graduate,” Zoller says. “They need a little bit more experience when we’re talking about certain industries. We look at the Adams Apprenticeship as a long-ball type of strategy to help support our students who see themselves as founders over the long haul.”

The program works like this: Apprentices are selected from a field of applicants and whittled down to the top 20-30 undergraduate and graduate student-entrepreneurs at UNC. These include founders, funders and high-growth executives—students that intend to be involved in startups in one of those areas during their careers.

Those students are then encouraged to build out a personal board of advisors using a variety of tools offered through the Adams Apprenticeship. Each student writes an ‘entrepreneurial leadership profile’ in which they evaluate their own strengths and weaknesses. They then work with entrepreneurs-in-residence who provide guidance on how to build a diverse board of advisors based on factors such as region, industry and experience. It is then up to the students to contact and foster lasting relationships with advisors from the program’s roster.

It all goes back to Zoller’s research

The Adams Apprenticeship was born out of Zoller’s research on the career paths of serial entrepreneurs. He discovered patterns in the lessons those entrepreneurs learned and how those lessons affected their paths to success. By giving students experience early on— connecting them with experienced mentors and exposing them to the often-harsh realities of being a startup founder—Zoller hopes to accelerate that learning process and prepare participants for a lifetime of entrepreneurship.

“You can look at their story based on the things that they’ve (serial entrepreneurs) learned, and we’re trying to accelerate that learning while they’re here in school by exposing them to those lessons up front,” says Zoller.

With Zoller’s research and Adams’ money to support the project in place, the time came to organize the Adams Advisors and select the first class of students. Dina Rousset, associate director of the Center for Entrepreneurial Studies, agreed to lead the project and started working to build out a network of UNC alumni and supporters.

As any entrepreneur would, Rousset began seeking feedback from her customers—the students and advisors who would be participating in the program. She quickly discovered that both parties were less interested in being paired with a single mentor or student, but that a network would add the most value.

“As we originally began designing this as a mentorship program, we thought about a one-on-one. What we heard from both sides was that a one-on-one relationship is really difficult,” Rousset says. “Generally, you don’t have one advisor in your life. We wanted to help those students build a personal board of advisors.”

According to Rousset, the alumni “didn’t just want a relationship with one student, they wanted the opportunity to meet all 20-30 students.”

After this feedback, Rousset went to work organizing networking events for the students and advisors. The kickoff event was held in a private home in Chapel Hill in January 2015 and had over 80 attendees. An April 2015 event in New York City drew 50 attendees and included visits to Counter Culture Coffee’s training center and the offices of TED and CommonBond.

After receiving overwhelmingly positive feedback, Rousset planned another networking event in the San Francisco Bay Area for September, where students flew out to meet Adams Advisors on the West Coast.

The opportunity to build a board of advisors and learn from startup founders was the extra push that aspiring entrepreneur Ricky McMahon (MBA ’17) needed to start a venture as a full-time student.

“I had it in the back of my head. I wasn’t 100% sure that I wanted to coming in,” he says. “Once I got into the program, I saw the help and the opportunity to take that path through entrepreneurship and that drove me in the right direction to take the leap.”

McMahon is unique, even among the entrepreneurially-minded Adams Apprentices, in that he is working on a venture as a full-time MBA student. While many of his classmates headed off to Charlotte, Atlanta and New York for prestigious internships at multinational corporations and large firms over the summer, he stayed in Chapel Hill to work on his startup BlipMe, an app that helps friends better communicate when out on the town.

McMahon says that while he was the only one of his classmates working full-time on a venture over the summer, most of his fellow students and professors reacted positively to his decision to forgo an internship and pursue his dream.

“It seems like the UNC community in general is very supportive of multiple paths – especially entrepreneurship, because it’s not the typical path and it’s risky to say the least,” he says. “To have people that are not only supportive but wanting to help and giving me resources has been really helpful to me.”

The program is not only for business students, however. The Adams Apprenticeship is for UNC undergraduate and graduate students who are studying any subject. Zoller believes this diversity and opportunity for peer-to-peer learning is one of the strengths of the program.

At a time when some thought leaders – such as Pay Pal founder Peter Thiel – are questioning the value of a traditional university education, Zoller believes initiatives like the Adams Apprenticeship will reverse that trend.

“I see it as a vehicle to make universities relevant again against Peter Thiel’s model in entrepreneurship,” he says. “I think one of our greatest assets is our university model and bringing people up—identifying great talent and then giving them the preparation to be breakthrough entrepreneurs. That’s how we’re going to move our society forward.”

By Aaron Scarboro. This article was adapted and republished with permission from ExitEvent.